Are you there, meatloaf? It’s me, Adam. 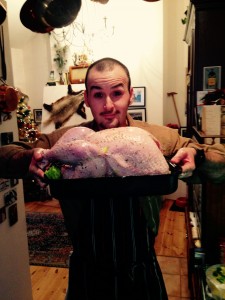 Well hello there, strangers. Who turned out the kitchen lights? Anyone there?

I must confess that I have been quite the lazy writer as of late. Lackluster on the posts and unable to make the time to share with you all that has (or has not) been cooking up in my kitchen. You see, November and December truly was divided into two parts; the first part being hosting a 14-hour Thanksgiving event in our flat, a Christmas party, and even a winter baby shower for a dear friend, V. With all the time preparing and cooking for my guests (think a 9 kilo turkey, candied klobasas, and much more) I defaulted to the second part: fast & quick, on-the go food. Am I the only one who does this? You get so busy cooking that on your “days off” you reach for something of the desirable-non-desirable sort? (fast food comes to mind). What a louse. A heretic. I should know better, but I honesty could not wash nor see another dirty dish in my sink. 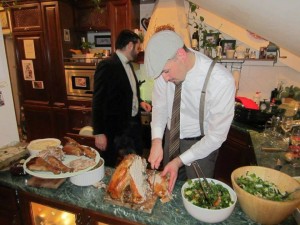 Thanksgiving, the 4th annual celebration we host in Prague

But then it happened. Food & Wine started blogging about Gougères; the richly-baked cheese puffs that can make any copper pot or cook sing in chançon delight. I had just made them the night before actually for the husband for a long-overdue movie night snack on the couch. “What the.. hey! I posted my recipe way before! And it doesn’t take 28 minutes. 22, actually. Look!” (I think saying “long ago” was a tip-off that I have been a heel). He looked at me like, “Honey, well…” “Well” is right. I needed the proverbial fire under my.. skillet and return to what I love; cooking and having a small bitch about it with you.

Well, I didn’t have to stay puzzled for long. You see, I had over a kilo of ground 80% beef in my fridge (Hm, I never did quite get around to making those Swedish meatballs for that baby shower.) and I finished a meeting quite late the other night. What do you do with that much product (especially since the husband is a vegetarian going on 2 years now). “A meatloaf!” Right. That will be good but isn’t meatloaf a kind of boring, grandma-ish time capsule of a dish? Not to be vulgar, but it is like going to bed with someone who just lies there passively like a starfish; lies there not doing anything. A bore. Kinda like a dish that may go along the lines of “Is this piece over yet?” A meatloaf-starfish. Lying there on it’s back. Staring at you with dead eyes.

But does it have to be? Oh no. I didn’t have enough time but I definitely had enough to give this meatloaf some flavor and create an awesome sauce that would complement the dish. So why not a meatloaf? It’s a snap. Let’s take that recipe and welcome it to the New Year!

And to all, Happy New Year! 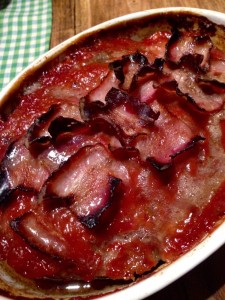